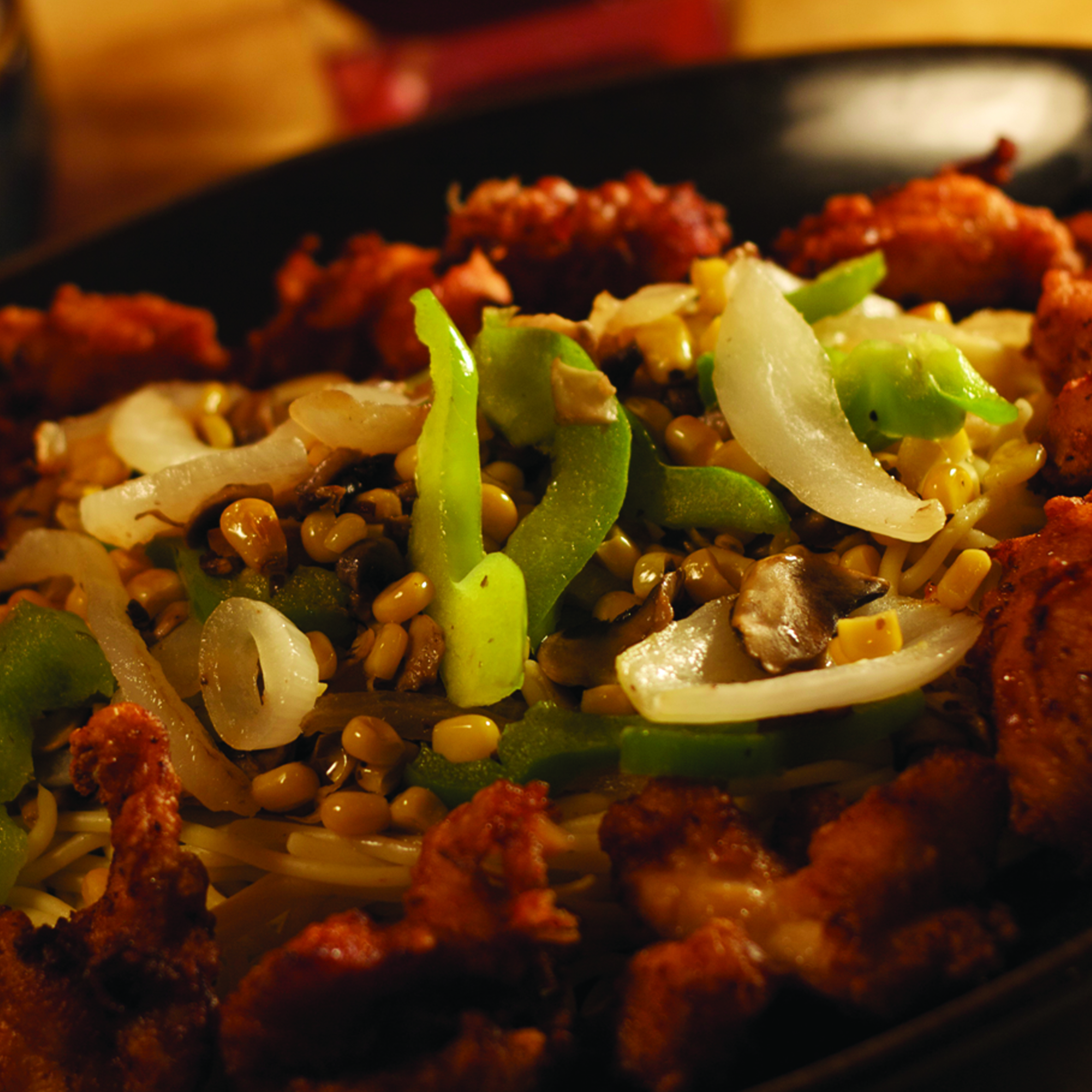 Are you a fan of our Chicken Pasta? Or Naporitan? One of our most popular dishes – Chicken Pasta  – combines Japanese succulent fried chicken bites, lightly sauteed vegetables, and our tangy secret white sauce over piping hot spaghetti. You might be surprised to learn the spaghetti option on our menu is not an American choice, but a thoroughly Japanese dish referred to as “Wafuu Pasuta”, aka Japanese-style Pasta.

Following the Meiji Revolution in the mid-1800s, Chinese wheat and rice-based noodles entered the Japanese repertoire, evolving into the much-loved dietary staples of ramen, udon, and somen. Sometime following World War II, Italian style pastas made their appearance in Japan, complete with Italian sauces, yet the incorporation of uniquely Japanese sauces and toppings did not make an appearance until the mid 1970s.

“Pasuta” dishes blend Italian wheat and egg noodles with distinctly Japanese ingredients such as Japanese curry, fish roe, seaweed, or Shiitake mushrooms, and a curious sauce based on ketchup known as Supagetti Napolitan. Most wafuu pasuta dishes are easy to throw together, and are therefor regular staples in Japanese home cooking. You can find just a few of the hundreds of possibilities here. Note that achieving a more “Japanese” texture requires cooking the pasta a little longer past the “al dente” point.

In particular for all our vegetarian fans, we proudly present Yaki Kare (Baked Curry) based on our Japanese curry with Spinach and Mushrooms.

All you need for this yummy next-day meal is some grated cheese and a small oven-proof casserole dish. Adding an optional egg baked on top is a pretty nice addition as well.

You can pick any cheese you want – an couple of options we like are Mexican blends or Italian blends found in a regular grocery store. Cheddar cheese (either mild or sharp) and Swiss work as well.

Start with a layer of leftover rice lining the bottom of the casserole dish.

Next spread a generous layer of the curry over the rice.

Sprinkle the cheese of your choice over the curry.

Ready for the broiler!

Pop under the broiler for approximately 2-3 minutes, until bubbly and golden brown.

If  you want to top with an egg, create a “nest” in your layer of cheese. Crack open the egg and gently drop into the cheese nest.

With cheese and egg – ready to bake!

Bake in the oven at 300F for 15-20 minutes or until cooked through to the level of “doneness” you like.

Topped with a baked egg 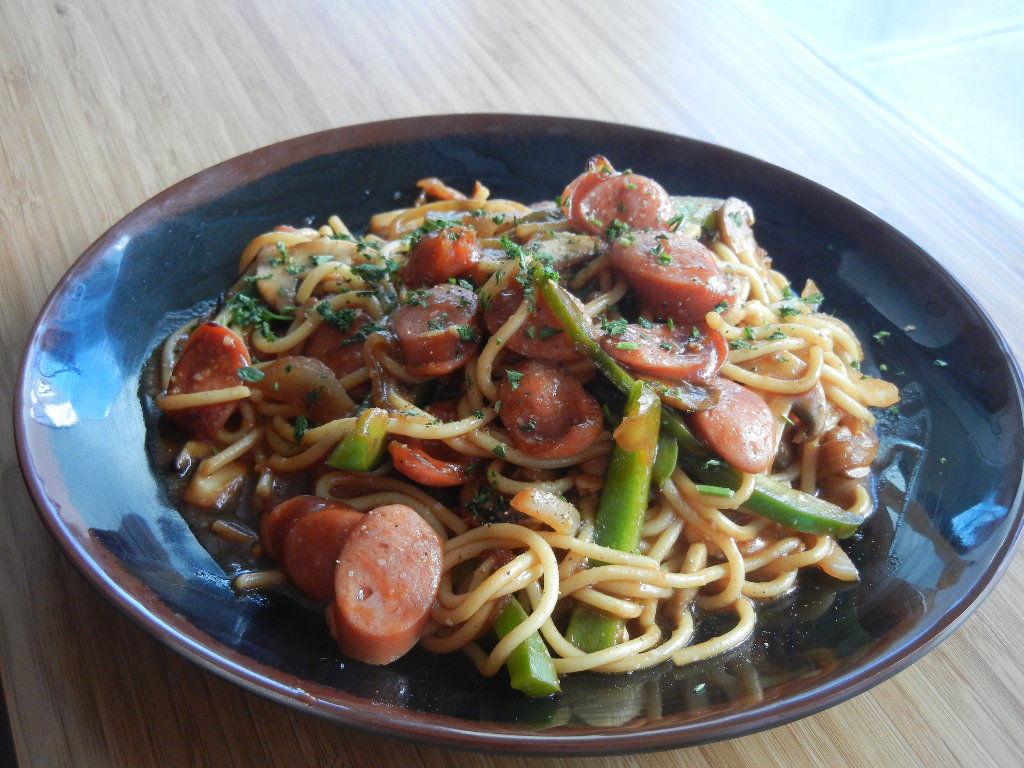 Naporitan – Ketchup in my Japanese Pasta? 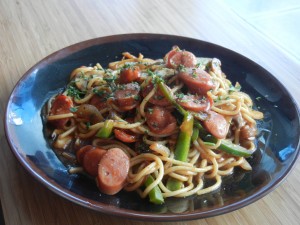 One of the more curious staples on menus of coffee shops through out Japan is the go-to comfort food known as Spaghetti Naporitan or Napolitan (Japanese: ナ ポリタン) . Despite the Italian reference in the name, there is little Italian authenticity in the popular dish.  Like many Yoshoku creations, the Japanese have taken ingredients from other cultures, combined with items found on hand, and created a totally unique dining experience.

According to the local lore of Yokohama,  the arrival of American troops following World War II inspired the dish. Yokohama’s Hotel New Grand was taken over by the U.S military and used as accommodation for the occupying forces, including Gen. Douglas MacArthur.  The army crew used  military rations of spaghetti mixed with ketchup, cooked in the hotel kitchen, to serve military personnel. Years later when normal operations were resumed at the hotel, Shigetada Irie, the hotel’s head chef, replaced the ketchup base with his own recipe of  tomato sauce made with fresh and boiled tomatoes – the version still served at the Hotel New Grand today.

Despite the recipe used in the Yokohama hotel, however, most modern versions stick to the original ketchup interpretation. As described by Nippon Naporitan Gakkai (Japanese Napolitan Society), which lays claim to the right to accredit restaurants serving the dish, Spaghetti Napolitan is specifically made with a ketchup-based sauce. After that, however, the variations are only limited by imagination. The ketchup base may be enhanced with tonkatsu sauce, heavy cream, or even jarred marinara sauce and white wine.  Most recipes call for sauteed onions, green peppers, mushrooms, and ham, but innovated chefs may substitute hot dogs, sausage, or possibly bacon. (We use Japanese kurobuta sausage.) Individual customers may choose to enhance the experience with Tabasco sauce, grated cheese, or Teriachi sauce from our self-serve condiment counter.

Along with  Japanese curry, wafuu pasta, and other Yoshoku dishes, we are pleased to bring you our take on a truly unique Japanese creation – Spaghetti Naporitan! 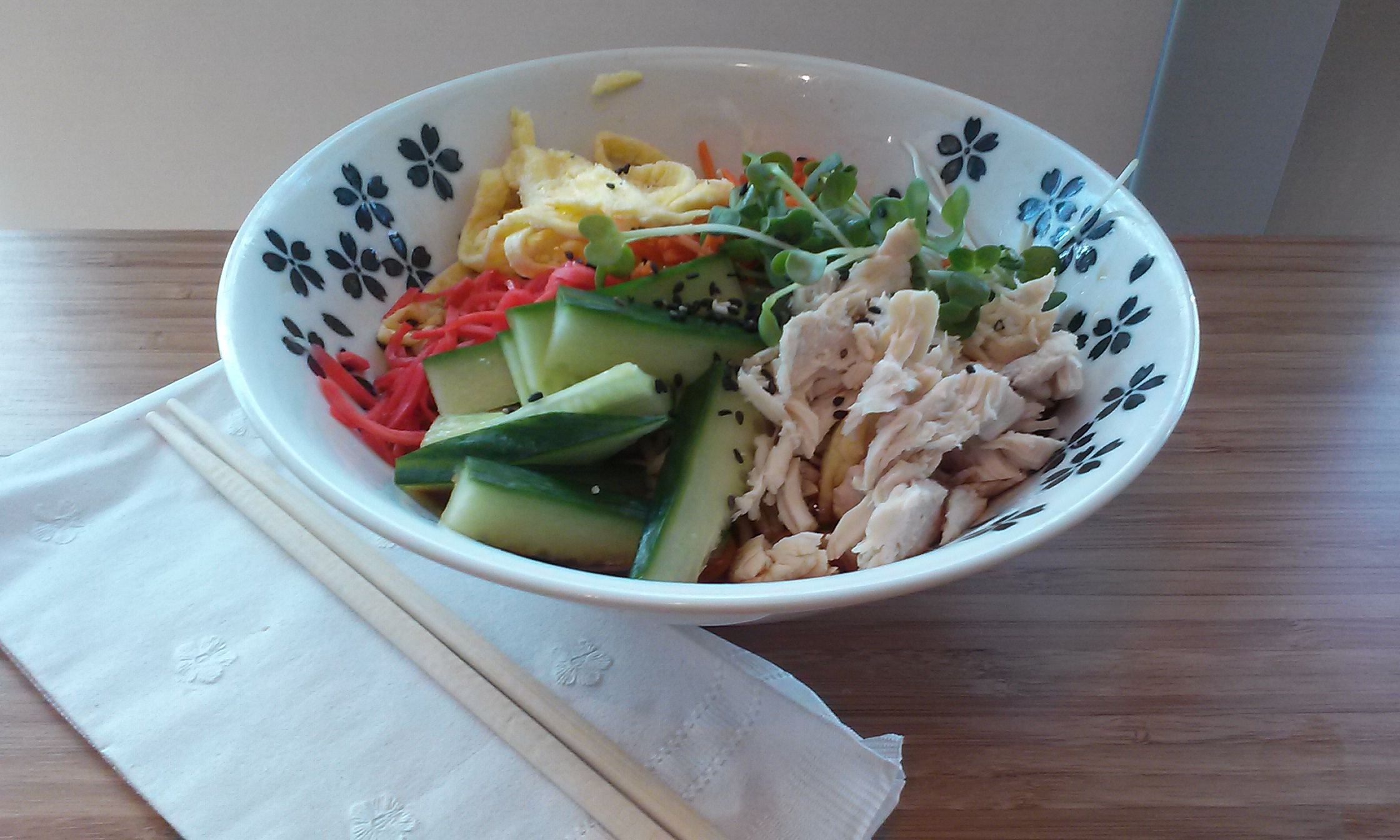 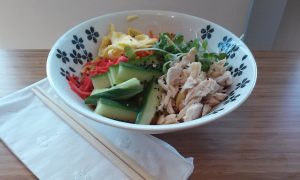 The name “Hiyashi Chuka” translates as “Chilled Chinese food” although only the ramen noodles have roots in China. First seen in Sendai about 80 years ago as a combination of Western, Chinese, and Japanese influences, the origins of Hiyashi Chuka are unknown. Toppings vary according to the imagination of the chef. Hiyashi Chuka is truly an iconic treat, especially in the southern areas of Okinawa, Osaka, and Kyoto.

There is no one “true” recipe for Hiyashi Chuka. Like many Japanese dishes, the recipe is up to the whim of the cook and may be augmented with leftovers. Check out this recipe from “Just One Cook” with shrimp and tomatoes, or this recipe from Japanese Cooking 101 featuring strips of ham. 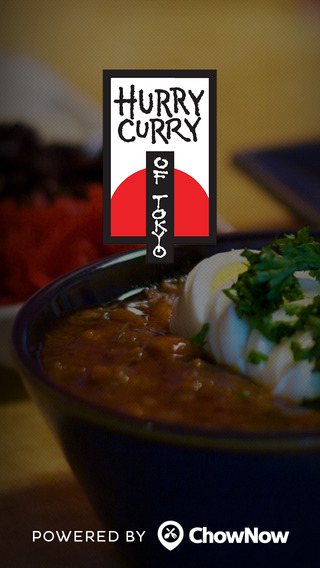 Thanks to our partner ChowNow, you can now order in advance and pay for your pickup order ONLINE HERE .   We also have apps on both the Apple App Store and Google Play  – look for     HURRY CURRY TOKYO (powered by ChowNow) and use the Seattle location to order.

Take Out - Delivery - Dine In