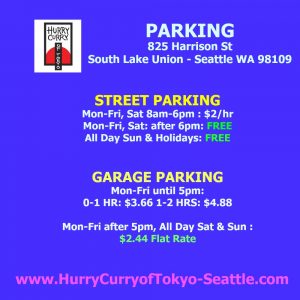 At Hurry Curry of Tokyo, we are pleased to bring you the flavors of Japan’s favorite comfort food – Japanese curry!

Hurry Curry of Tokyo first opened its doors in our Sawtelle Japantown (West Los Angeles) location in 1989. After spending time researching Japanese curry houses in Tokyo in the 1980’s, our goal was to bring the wonderful flavors and value of these popular restaurants to Los Angeles. Working with Japanese chefs from Tokyo, we developed our own original blend of 21 spices for our signature curry sauce. Our customers tell us this is why they keep coming back.

In addition to Japanese curry, our menu features typical Japanese comfort foods in the Yoshoku style….comfort food dishes which originated in another country and then were adopted and re-imagined by Japanese cooks into something uniquely Japanese. Think reverse “Asian Fusion”.

The greatest surge in Yoshoku popularity is tied to Japan’s political upheaval in the mid 1800s. Emperor Meiji’s returned to power in 1867, and subsequent move of the capital of Japan from Kyoto to Tokyo in 1868, marked a dramatic turn of economic and social changes known as the Meiji Restoration. Japan swung open its doors to Western influence and trade, reforming not only education, religion, government, and attire, but also culinary traditions. The Japanese adopted many Western foods, tweeked with unique Asian sensibilities, to create a cuisine known as “Yoshoku” (Western style Japanese dishes). Once used to only describe dishes developed during the Meiji Period, Yoshoku has come to loosely describe any dish derived from foreign origins, including curry (Indian, Great Britain), gyoza and ramen (China), croquette (France), as well as tempura and katsu (Portugal). In fact, many of the dishes served today in Japanese restaurants in the US are really “Yoshoku”.

One of our most popular dishes, Chicken Pasta combines Japanese succulent fried chicken bites (Tori no Karaage), lightly sauteed vegetables,  and our tangy secret white sauce over piping hot spaghetti.  It may come as a surprise to the uninitiated, but the spaghetti option on our menu is not an American interpretation, but a thoroughly Japanese dish referred to as “Wafuu Pasuta”, aka Japanese-style Pasta.

Following the Meiji Revolution in the mid-1800s, Chinese wheat and rice-based noodles entered the Japanese diet, evolving into the much-loved dietary staples of ramen, udon, and somen. Sometime following World War II, Italian style pastas made their appearance in Japan, complete with Italian sauces, yet the incorporation of uniquely Japanese sauces and toppings did not make an appearance until the mid 1970s.

“Pasuta” dishes blend Italian wheat and egg noodles with distinctly Japanese ingredients such as Japanese curry, fish roe, seaweed, or Shiitake mushrooms, and a curious sauce based on ketchup known as Supagetti Napolitan.  Most wafuu pasuta dishes are easy to throw together, and are therefor regular staples in Japanese home cooking. Note that achieving a more “Japanese” texture requires cooking the pasta a little longer past the “al dente” point.